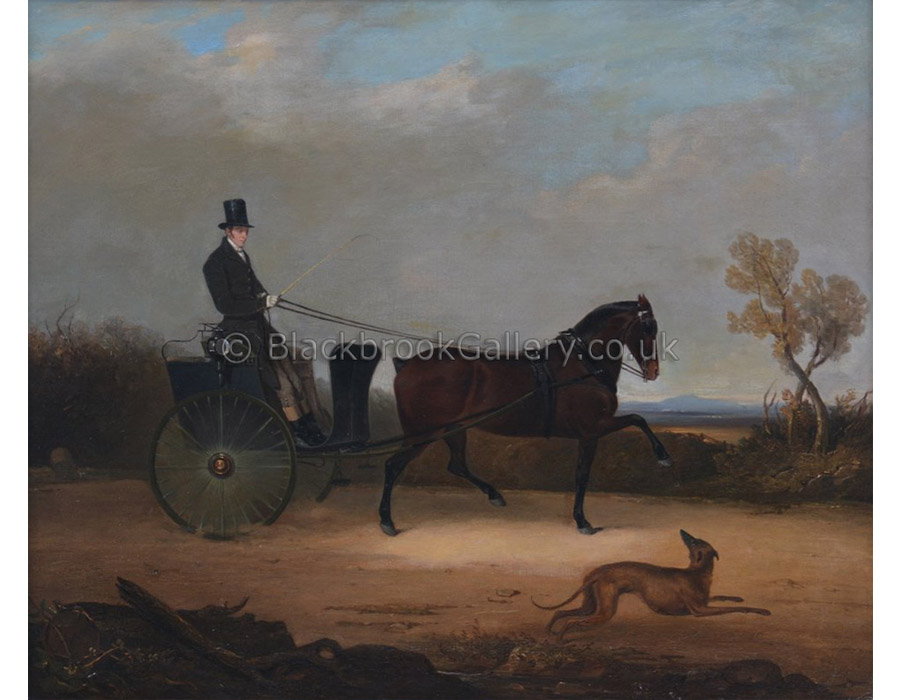 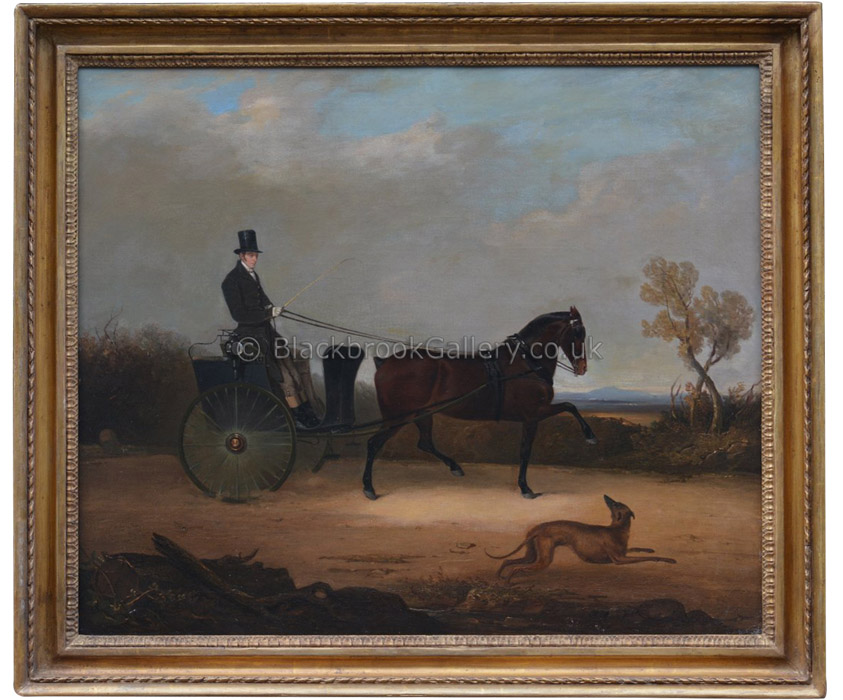 Inscribed to rear:-
Lord Alvanley exercising his trotter Brandy.
James Loder of Bath 1784-1860.
Formerly in the collection of the Duke of Beaufort, Badminton Park, Gloucester.

William Arden, 2nd Baron Alvanley (8th January 1789 16th November 1849).
British Army officer, peer & socialite, who was one of a close circle of young men surrounding the Prince Regent.
Lord Alvanley was a prominent Regency Buck & member of the Prince Regents circle & was friends with Beau Brummell.
He was popular in society and regarded the wittiest man of his day. He, Brummell, Henry Mildmay, & Henry Pierrepoint were considered the prime movers of the Watirs Club, dubbed the "Dandy Club" by Lord Byron.

They were all four hosts of the July 1813 masquerade ball at which the Prince Regent greeted Alvanley & Pierrepoint, but then "cut" Brummell & Mildmay by snubbing them, staring them in the face but not speaking to them. Brummell then said to Alvanley, "Alvanley, who is your fat friend?". The Prince Regent was not amused; this incident was the final and most public sign that Brummell was no longer favoured by the Prince.

Alvanley continued to support Brumell, sending money to his friend during Brummells exile in France. In 1835, Alvanley fought a duel with Morgan O'Connell. According to a near contemporary report Alvanley went through the business with the most perfect sang froid, but on his way to the field he whimsically intimated a singular alarm. Having descended a hollow, 'My Lord', said he to his second, 'you get me down well enough, but', alluding to his size, 'should I fall, I do not know how the devil you will ever get me up again.'

He had an extremely lavish lifestyle, funded by income generated by the estates that his father had purchased.
His prominent position in society also allowed him to float a line of credit.
However, his debts became untenable & eventually his family estates had to be sold to pay them off.
Underbank Hall in Stockport was sold at auction in 1823 & most of the Bredbury estate was sold in lots in 1825. In 1827 he sold the Willington Estate to Waterloo veteran William Tomkinson, land that would become the site of Willington Hall. The Arden mansion was sold in 1833. He eventually resigned his membership of Whites. The death of George IV in 1830 saw Alvanley's society position deteriorate, which was further hampered by his limited income. He occasionally contributed to debates in the House of Lords. He did not marry & had no children. On his death, the title went to his only brother, the Colonel Hon. Richard Arden.